A blog on QA Automation

Part 3. Getting Started with Screenplay Pattern

Getting Started with the Screenplay Pattern

The Screenplay Pattern is an approach to writing automated acceptance tests founded on good software engineering principles that makes it easier to write clean, readable, scalable, and highly maintainable test code. … For example, it is very easy to write a test with several actors using different browser instances.

With Page Objects model, it serves its purpose quite well up to a point, but then eventually, page object classes can start getting bigger, making it harder to find things and increase code smell due to having a large class. A large class could be caused by a number of things, such as code duplication, or lack of abstraction.

Often times, Page Objects model is a SOLID anti pattern and page objects quite often break the Single Responsibility principle, even if the page objects are broken down in to smaller classes.

A great video on the pain points of Page Objects Model and the benefits of Screenplay Pattern can be found here.

Another good example could be the use of PageFactory. When using PageFactory, frequently it breaks the YAGNI (You Aren’t Gonna Need It) principle.

We can think about this scenario in various different ways:

If we look at the words above that are in bold, they are the foundations of the Screenplay Pattern. Let’s try and explain each one in more detail…

The role we need someone to play for this feature is a ‘just-in-time kinda guy’.

Each role we discover requires an actor to play it. In the above feature, we have created an actor/persona called James who will play the role of a ‘just-in-time kinda guy’

A defined actor can perform tasks or ask questions about the state of the application.

The goal of an Actor is represented by the subject line of the test scenario.

In this case, the goal would be ‘adding the first todo item’.

James should be able to complete his goal of adding the first todo item to his list.

In order for an actor to achieve their goal, they need to perform high-level tasks.

We name tasks using the vocabulary of the Problem Domain, where our customers live.

For example, in the above scenario, one task could be to AddATodoItem.called('Buy some milk') , which mapped to a Cucumber.ts step definition could look like the below…

In order to perform a whole task, the task will contain/encapsulate multiple interactions directly related to completing the given task.

Similarly to an Interaction, a Question directly exercises Actor’s Ability to interact with a specific external interface of the system – such as a website, a mobile app or a web service.

Asking a Question results in a promise that is eventually resolved to a specific value or a list of values.

In order to interact with the system, an Actor needs Abilities, which encapsulate interface-specific clients.

Those clients could be a web browser, a web service client, a mobile device driver and so on.

For example, for a web application, the actor would need the ability to BrowseTheWeb.

Another example could be for a web service, where the actor would need the ability to InteractWithTheApi.

Visual Diagram of The Model 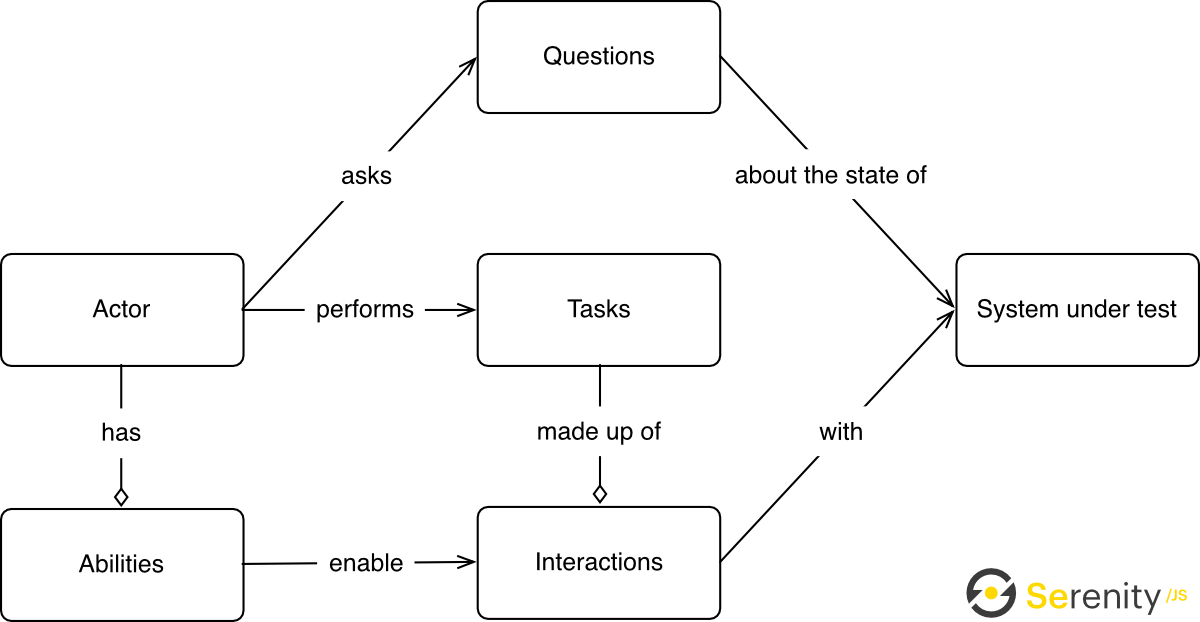 Liked it? Take a second to support Thomas on Patreon!

This site uses Akismet to reduce spam. Learn how your comment data is processed.

Hi! I’m Tom, an experienced QA Lead and Test Automation specialist helping businesses and clients add value to their products and services through process improvements, test automation training and design, implementation of agile QA functions and all round best practices.

Any cookies that may not be particularly necessary for the website to function and is used specifically to collect user personal data via analytics, ads, other embedded contents are termed as non-necessary cookies. It is mandatory to procure user consent prior to running these cookies on your website.